With the introduction and wide adoption of smartphones and later introduction of Hololens and Oculus Rift, Augmented Reality technology that once seemed a thing of somewhat distant future became feasible and started to evolve. It took some time to get a grasp on fundamentals but now the development of an augmented reality application is not much of a problem - just a matter of figuring out what’s and why’s.

At the moment, there are very enthusiastic forecasts that show figures as high as $108 billion by 2021 and $162 billion by 2024 for Virtual reality & Augmented Reality industry’s market value.

If we take a look at the current year statistics and forecast of AR revenues from 2018 to 2020, we can see that AR Services are projected to rise exponentially next year: 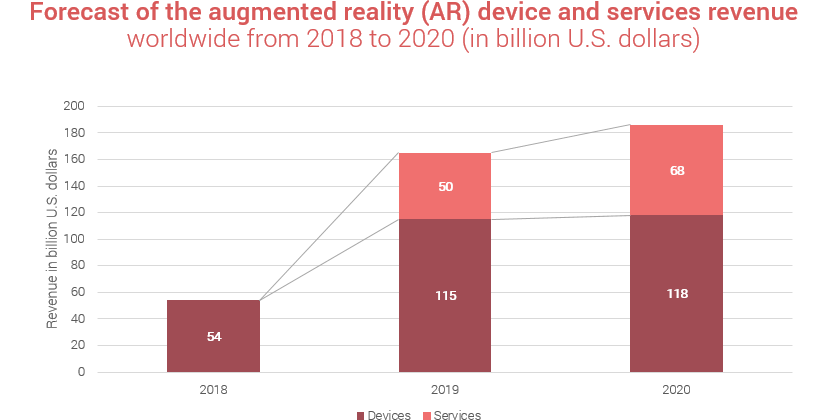 One of the weirdest things about Augmented Reality technology is that despite experiencing wide adoption and mass public acceptance - it is not doing all that well business-wise.

Let me explain - the industry is doing fine. There is a steady flow of investments in the augmented reality app market and the general background is more than positive. However, all these investments are yet to pay off big time. Part of the reason is that no one had figured a distinct AR-related Business Model that will work long-term (besides, probably, gaming industry.)

Sure, startups are popping up like mushrooms after the rain with more and more outlandish concepts at hand and many big companies are trying out various AR-related solutions, but there is one thing that should be noted - all these solutions are integrated into the business models that can be effective with or without an AR solution.

This is a big problem that undermines an Augmented Reality industry. Essentially, it makes the technology look like a gimmicky tool even though it is the farthest thing from it.

The biggest AR product of the recent times - Pokemon Go broke even only because of a power of the brand. And after the hype died down, the retention rate followed. And the same goes for IKEA and Amazon AR applications - they are cool but not something you'd die without.

Part of the reason for that situation is that Augmented Reality technology, for the most part, isn’t meant to be a thing of its own but a supplement or augment for the thing it is applied for.

However, there is a ray of light in the form of industrial companies. Why? They have enough financial resources to boost development and there are plenty of fields where AR technology might come at handy.

These kinds of applications have a potential to establish an augmented reality technology not as a toy but as a viable helping tool that improves the overall quality of the end product.

Standards are something of a universal language for a software application. It is one of the ways to secure its compatibility and contribution to the overall development of the technology. At the moment, this is the thing that is under construction for Augmented Reality.

The reason is simple - it's too soon. The technology is too new and it is still coming to its own both in hardware and software terms (despite "technically" being around for a while.)

So what’s the problem? Without standards, every augmented reality-related project is basically a thing of its own barely compatible with the others. That complicates the process of unifying solutions to the greater whole which makes the overall development of the technology much slower than it could have been if everyone had been on the same page.

However, implementation of technical standards is a question of time and its adoption will signify the final stage of establishing the technology as a real deal

Privacy & Security also pose significant challenges that AR industry. Due to inconsistencies in augmented reality programming, oversight, and negligence, there is a legitimate chance of getting into trouble without meaning to do so.

The biggest issue is that there is no actual regulation that designates what is allowed and what is not in the augmented reality environment. Which means the technology can be used with malicious intent just as it can be used for entertainment.

For example, “try before you buy” option for clothing but instead of overlaying the cloth on your body someone may overlay another nude body and spread to damage your reputation or blackmail. Or AR can be used to hijack accounts via surveillance and mining data output by slightly manipulating and overlaying AR content (just as in ad stacking fraud schemes).

The Possibility of Physical Harm

While long-term effects of using Augmented reality are much better documented than ones for Virtual Reality (uh-hm), there is still a significant possibility of harming yourself and the surroundings due to nature of the application and lack of attention.

The thing is - Augmented Reality operates in the real world and adds a little bit of digital into it. These elements are driving attention away from reality which may cause a potentially dangerous situation.

For example, remember all those news about people hurting themselves while playing Pokemon Go? Well, it is just a tip of an iceberg.

Augmented Reality, while being a worthwhile addition to the proceedings, can also serve as a significant distracting factor. This is why automobile manufacturers are so reluctant with implementing AR displays - it is more of a liability than the actual advantage for the driving process.

As such, there is a need to develop a certain kind of AR interface that will be useful and yet not distracting from the process.

While AR technology is rapidly developing and gradually expanding its scope - the problem with its use cases and the content still remains. In fact, it is currently leading the top of unsolved problems in augmented reality in terms of being threatening to derail an industry.

The majority of AR-related content available at App Stores are mostly a showcase of simple tricks and not much else. Its goal is to present some brand as forward-looking and cunning. It is designed to be a one-off affair.

Sure, AR technology is still in its infancy, but if you look at what things augmented reality development companies are trying to pull off with more or less same tools (all HoloLens or Google Cardboard projects related to Healthcare or Education) - the aforementioned solutions seem a bit lacking.

Part of the reason for this problem is because of a lack of expertise in the field. There are not enough developers who have a firm grasp on the technology and can deliver an accessible and useful experience.

The other big problem looming over the AR industry is lack of credible use cases for AR technology. At the moment, the majority of AR apps are one trick ponies that can do one thing which can be done without their assistance with the same level of effectiveness. Augmented Reality is a supplementary element to other activities by design - it must significantly contribute to the process either by providing additional information in a more convenient manner or providing assistance in performing certain actions.

Part of the reason why it is so is that of the very nature of AR - it is an addition, augmentation of the other thing and the only way for it to be successful is to be a natural extension that makes the overall activity easier and more effective. Which comes with tries and fails.

As it was mentioned earlier - AR displays for cars seems like a good idea on paper, but not really a useful solution in practice. On the other hand, AR in medical or engineering training can be very helpful. The same goes for infrastructure planning and on-set simulations.

While Augmented Reality seems to be a relatively popular topic in the media and frequently mentioned as one of the most exciting emerging technology - its overall public reception is, for the lack of the better word, mild.

Part of the reason for that is that the quality of the majority of AR content is mostly hit and miss. Out of this comes the notion that AR applications are nothing more than an unnecessary addition. However, the situation will probably revert with a couple of “killer apps” that will prove the worth of technology in one swift sweep.

The other part of the problem is that the public, for the most part, is not aware of the benefits of augmented reality in various fields. It is still perceived as zany science fiction by a significant part of potential users.

Then there is a retention problem. Despite the popularity of the Augmented Reality technology steadily growing over the past few years, there is still a significant problem in keeping an audience using Augmented Reality applications in a long-term perspective.

The current state of affairs with AR apps looks like this: users download the app because they saw some advert that hyped them up, uses it a couple of times until the goal is realized or interest is satisfied and then abandon the app due to lack of long-term use cases.

Another big problem with implementing AR solutions is the technological gap between AR devices. It is one thing to design an app for a fully-fledged AR gear and it is a completely different thing to do it for a smartphone. The latter case got many limitations that make the whole experience not really user-friendly and somewhat superfluous to the activity it augments.

Considering that the majority of the target audience will not likely purchase AR gear due to its impractically and high prices - smartphones remain a preferred function and since they have certain augmented reality app design limitations - it neuters the whole point of implementing AR solution to the mix.

What’s the solution to this problem? It is a question of time when the price for AR gear will drop to a mass consumer acceptable level. The thing is - Augmented Reality Technology is in its early stages and it is too soon to expect that its gear will be available for a regular Joe from the get-go.

With great power comes great responsibility and AR is such a power. While it is awesome that you can easily navigate through the streets using your augmented reality app, public spaces become sort of "hijacked." Remember the Pokemon Go and the rather sensitive story about people going to the Holocaust Museum to catch "that one pokemon" they need for the collection?

It is also important to remember that when people are using augmented reality apps, they are sort of "located" in two worlds - one real and another virtual. Therefore, as we mentioned above, you should beware of where you're located in the physical world, making sure you're not about to cross a busy road with your nose in the cell phone or wander into someone's private land (and get a fine, in the best case scenario.)

While the list of aforementioned AR-related challenges may seem intimidating and off-putting - there is nothing to worry to about for the Augmented Reality technology. It has proven its capabilities of expanding user experience and making it more convenient and effective.

The solution of these challenges is more of a question of time than anything else and it is certain that AR technology will find its own footing and establish itself on its own terms very soon.

Best Mobile App Development Frameworks Of 2017   Opting for a mobile app development process is itself a confusing and complex process for a non-tech savvy person. Selecting the right framework for your application is the most important step

Your Guide To Messaging APIs for Enabling Web 3.0 Internet Communication

Your Guide To Messaging APIs for Enabling Web 3.0 Internet Communication  Given all the promise of the Internet, we initially experienced it only as an information dump with millions of websites containing billions of web pages hyperlinked